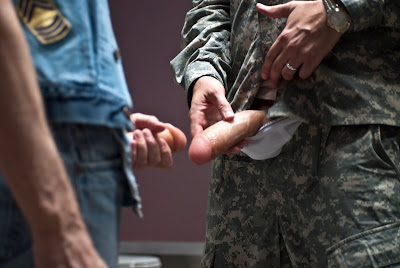 How did you make this story (TAMPA) your own?

Well, knowing this is my spin on a Tom of Finland scenario, just about anything you see in this story that’s not Tom of Finland came from me. I’m happy to say that it’s quite a bit. By the way: before my father the minister died (and presumably went to heaven…though we can never be too certain), he put his doctrinal seal of approval on the story. Agreed with the theology, he said. The last shall be first and all that.

What research (if any) did you conduct before writing TAMPA?

Hm, I guess I’d rather not say.

What excites you about writing a new screenplay? What makes you want to write?

If there’s anything consistent in my approach to new work, it might be that I’m usually looking for something different. Different from what I’ve done before, tonally or structurally; different in size and scope. Different also from what I see going on now in filmic media: stories that aren’t being told and can’t be told in any way other than how I’m going to tell them. From doing the work, I hope to discover my personal differences as well. By the end of a project, I’ll find that some aspect of my world view has been expressed—a total delight for someone as inept at political conversation as I am. Through writing, I can experience psychological and emotional states familiar and unfamiliar as a personal kind of whetting stone. With each film, I try creating and using various modes of film poetics, elements of story and genre, and, to a lesser degree, different tools of language in both script and dialogue. Some day I might look back and see that I’ve written the same script over and over, but at this point, each one seems fresh to me. So I’ll keep enjoying this aspect of it until maybe someday it stales. When that happens, though, perhaps I’ll be perfectly satisfied writing the same old thing as before.
Posted by An omnibus-of-shorts film at 7:05 AM