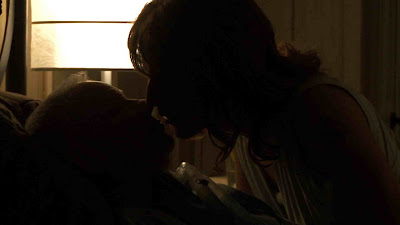 Here's my chat w/ Gary Chason, the actor who plays Tom, the husband who orders his own special encounter in SAN FRANCISCO. Gary has created quite a rep for himself during his forth career as an actor (DEAR PILLOW, et al). He gave me my first film job as a video assist operator during his third career as a film producer in Houston in 1989, following his very successful second career as a casting director on such films as THE LAST PICTURE SHOW, PAPER MOON, and PRETTY BABY, which followed his first career as a ballet dancer. Finally, a bit of a spoiler - Tom is "afflicted", but we won't reveal what exactly the affliction is, you'll have to see SAN FRANCISCO for that. - Kyle

When my mother was dying of cancer the television networks were spewing gobs of "Disease of the Week" movies. I despised them then, and still do, because they invariably used human illness and misery to achieve their dramatic effect, which I considered cheap, shallow, and insensitive. The "healthy" characters typically felt some emotional uplift in their treacly - and highly unrealistic - endings. So "Affliction" movies - a term that fits San Francisco - have always been my least favorite genre, followed by carnographic, or splatter, movies, and anything with a zombie, vampire, or superhero. So it was with great trepidation that I read the script.

Upon reading the script, I was relieved to see that this wasn't a typical affliction film, including for me these redeeming qualities: 1. the afflicted character, which I was slated to play, actually got to have fun, to be the one uplifted at the end; and 2. sexual perversity was the vehicle for that uplift. Redemption through sexual perversity is definitely my favorite kind, even though, personally, I would have made different choices than Tom did in his life.

2. What helped you prepare?

The knowledge that I was actually going to get paid. Not much, of course, but every little bit helps.

The biggest physical challenge was being perfectly still at all times. It's difficult to move the eyes without also moving the head. And I couldn't help but dread the razzing I would receive from my beer-drinking buddies about the irrumatio sequence. But the most daunting issue was backstory. I was so disturbed when I reflected upon what must have happened to Tom that I just couldn't go there. I decided to avoid backstory altogether - and not practice what I preach - and simply react, to be in the moment at all times. Later, I realized that that would be exactly what Tom would have done. The last thing he'd want to think about was the terrible trauma he had experienced.

4. Learned about the world or yourself?

Being an actor is still new to me. I've been a Casting Director, Director, Acting Teacher and Coach, but it's been many decades since I performed as an actor, largely because I considered it unethical for a Casting Director to also be an actor. But I left my professional casting career behind many years ago in order to concentrate on making my own films, so the ethical question is now moot. But because of my work casting and teaching - seeing the struggles and mistakes and seeing how many would-be actors made fools of themselves in auditions - I was terrified at the very idea of getting in front of the camera and acting. I've gotten over that and have come to realize that I possess that essential quality that an actor must have to be any good at all: Fearlessness. This project did not create that break though but definitely confirmed it.

While at first I thought the role would present too many challenges for me to accept, I also felt that nobody else, within a reasonable geographic range, would consider doing it. I believe in Kyle Henry as a filmmaker and wanted, as a colleague, to support his efforts. And wimping out would have been a serious code violation for me. I'm glad I did it and hope my efforts as an actor have contributed in a positive way.


Posted by An omnibus-of-shorts film at 9:03 PM No comments: