Posted by An omnibus-of-shorts film at 11:51 AM No comments:

FOURPLAY shorts continue to play all over the world in early June. The run down below and please recommend to friends whom you might have in each city. - Kyle

Posted by An omnibus-of-shorts film at 12:51 PM No comments:

Carlos Garza, programmer for the Morelia Film Festival, had this to report about the TAMPA screening at Directors' Fortnight. Thank you Carlos for being our eyes and ears since we had to skedaddle back to the USA before the premiere! - Kyle
The auditorium was about 3/4 full with nobody on the balcony seats, and from a quick perusal before the lights went down I could tell that a good proportion of those in attendance were non-badge holders, i.e. a real audience. Up until your film the program consisted exclusively of slow-moving, contemplative work and due to the Fortnight's habit of bringing the lights up between each short with a good twenty or thirty-second gap as well as the fact that it was a relatively long program, a lot of people started to leave after the fifth film, but quite a few came back once Fourplay: Tampa came on, perhaps also because the opening music indicated they were in for something different.

The audience was absolutely complicit as soon as the film's premise became clear, and the gasps before the guffaws were quite elated rather than indignant. I think everyone was extremely grateful to get a good laugh in regardless of their openness or savviness regarding the material. It's quite an accomplishment for the film to hold a non-gay audience captive like this, and I can assure you absolutely no one walked out once the film begun (I was checking).

As far as jaded queer audiences such as myself are concerned, I felt equally engaged. I think the film struck just the right tone and I really appreciate being genuinely surprised at where the film was heading. And well, absolutely no one could have anticipated the ending! The way the film crescendos is absolutely brilliant, my sincere congratulations!

On the way out I solicited some reactions from some high school students, who in an absolutely deadpan way said it was "disgusting" and "disrespectful". A thirtysomething year-old woman next to us overheard and said: "oh don't pay attention, it's because they're young, I thought it was amazing."

Shit, so it really has come down to this: the young as humorless upholders of traditional values. I've had so many indications of this lately that it was almost enough to kill my buzz. In hindsight I should have asked the high-schoolers why they stuck around until the end if they were so offended. An older man next to the thirty-something woman grinned and said, "I always suspected Jesus would give really good head."
Posted by An omnibus-of-shorts film at 10:56 PM No comments: 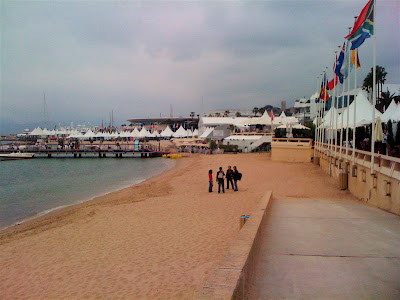 - Directors' Fortnight video interview re why "sex is fun"

Posted by An omnibus-of-shorts film at 9:53 AM No comments:

SAN FRANCISO plays at Kashish - Mumbia Int'l Queer Film Fest, one of the few GLBT fests in India this Thurs (5/26) at 1:30 PM at the Alliance Francaise de Bombay.

Also, on the opposite end of the planet, SAN FRANCISCO will play at the Mix Milano film festival in Milan, Italy this Fri (5/27) at 3PM at the Sala Grande (Teatro Strehler).
Posted by An omnibus-of-shorts film at 7:08 AM No comments: 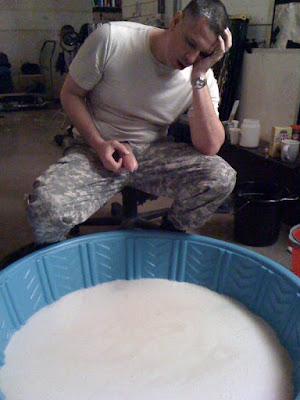 The second part of my interview with the screenwriter for 4PLAY: TAMPA, Carlos Treviño. To backtrack and read part one, click here. The film premieres at Directors' Fortnight in Cannes tomorrow, Friday, May 20th at 11:30AM in the festivals' JW Marriott theater. If you don't have any plans, why not jet over and give us the low-down? - Kyle

2) What issues or themes do you think TAMPA deals with for a straight and/or queer community regarding sexuality?

Every one of us has felt left out at some point, or to some degree. As much as the search for sex can be construed as a search for affirmation, this film is about a person searching for both in his particular place and way.

I think TAMPA addresses issues of looksism that run through the shallows of modern gay culture, and the anxiety and shame that can prickle up inside those of us who don’t fit into its templates. Queer culture should be a celebration of our differences as much as our commonalities. The plethora of body types represented in this film I think are reason alone for loving it.

(Speaking of that, I’m sad that, even searching every major city in Texas, we could not find a single African-American actor who would agree to be in this film. Even the queer ones wouldn’t come near us. Granted, the project is pretty outrageous, but still. Just to say, the script calls for more diversity than Texas was able to deliver.)

I think this film is also a visceral celebration of the baseness of sex and bodies. We don’t get enough reminders that humans are pretty much just squidge plus divine consciousness, so I’m glad to be able to provide that reminder with this script, in what I hope are completely disgusting and totally hilarious ways.
Posted by An omnibus-of-shorts film at 6:33 AM No comments: 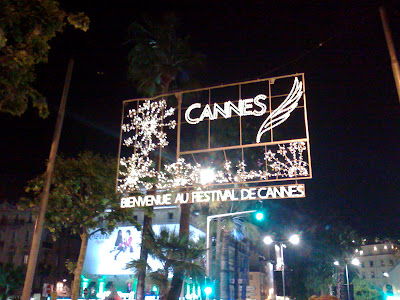 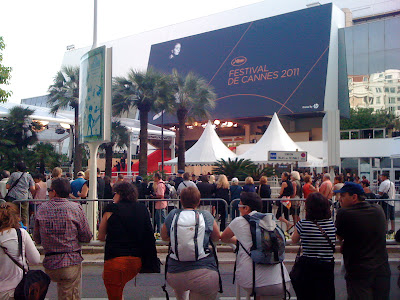 We came, we saw, we left exhausted. A few snapshots from our whirlwind trip to Cannes for the beginning of the Directors Fortnight section. For those of you who don't know, the Directors Fortnight was founded in 1968 to “defend artistic, moral, professional and economic freedom in filmmaking, and to participate in the development of new cinema structures.” See this great Scout Foundas article for more on its founding.

It today still is the bastion of the new, the unknown and the disposed of cinema while the Palais du Cinema down the street at the official festival is still the "establishment," where the big Hollywood behemoths compete with the international cinema cultural lions in the circus that is Cannes. Underground, hidden underneath the Palais is the open secret of what the official festival really is about, the Marche du Cinema, the market place of big money where films are bought and sold and entrepreneurs hawk their wares. The hierarchy of architecture though still prevails in Cannes (as in all cities) with most big sales occurring in the pent-house suites of film sales companies that most film goers wouldn't be able to ever name (e.g. Celluloid Dreams, the Wild Bunch, et al).

Is it a festival of cultural exchange or a center of hoary economic transactions? As a very little ant among the ants on the Croisette, I was happy to find that the Directors Fortnight hadn't changed since I was last there and was still a refuge for cineastes to gather away from the storm, to watch the work of young unknowns with something to say about the world in new ways, and to honor the hard work and frighteningly vulnerable position each new film and filmmaker puts themselves in when they share their films with the world. The Fortnight is not a church, or a marketplace, but a showcase and a gathering point for filmmakers and cineastes to gather, compare notes and disperse again to the far corners of the earth.

I felt privileged we could be in the presence of such a revitalizing gathering. More about the films we saw in the next post. - Kyle
Posted by An omnibus-of-shorts film at 6:01 AM No comments: 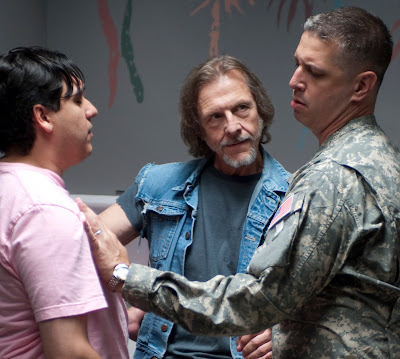 Part one of an interview with FOURPLAY: TAMPA screenwriter Carlos Treviño who also plays the film's very hunky military recruiter! Opppss, I think I'm revealing too much of a prior lifetime's military fetish. - Kyle

What and/or who inspired you to write TAMPA?

I needed to write something funny to counterbalance the two dramas I’d written for our FOURPLAY series. Around that time, I’d been given a compendium of Tom of Finland’s work. Tom was this gay porn illustrator who worked from the 1950s through the 90s creating erotic and fetish art that has become iconic in the gay community. So in one of these volumes of his work is this hilarious public men's' restroom scene. It starts with two guys alone in the restroom, scoping each other out at the urinals. One by one, various hyper-masculine Tom of Finland types wander in and join in the fun. It ends in this ridiculous butt-fucking conga line where everyone comes at once and leaves very happy and chummy. To adhere to the FOURPLAY theme (transgressive sex that is transcendent for one or more of the participants), I needed a character for whom this scenario could be both trial and triumph. So I started by placing someone very un-Tom of Finland into the scene; someone none of Tom’s guys would even look at: not chiseled, not masculine, not hung like an elephant. A sympathetic underdog on his quest for anonymous sex. As the writing went on, I discovered that making these other guys less Tom-like and more realistic only added to the pathos of our hero getting rejected by them over and over again. 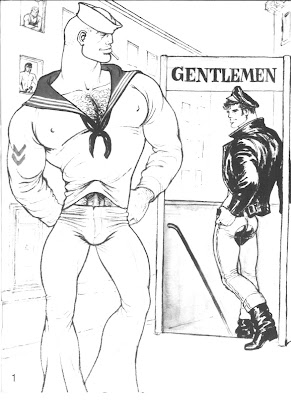 Posted by An omnibus-of-shorts film at 12:14 AM No comments:

OK, too much, too much! So here's where you can check out 4PLAY: TAMPA and SF in your own hoods this month ... all over the world. - Kyle

Posted by An omnibus-of-shorts film at 11:45 AM No comments: