SAN FRANCISCO: "Aliya, this is Anne." 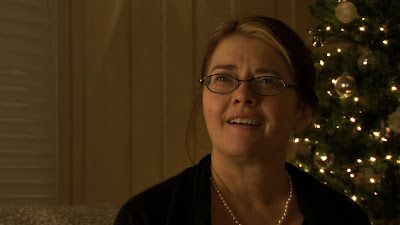 SAN FRANCISCO begins with a call from a woman to a transvestite prostitute. We do not for what reason Aliya has been called to Anne's home in Marin County, California... but we will soon find out. Anne is played by Cyndi Williams, the lead actress in my other feature film ROOM, and she will graciously begin an interview series with the three leads of SF that I'm conducting via e-mail. I've also inserted a few responses to her answers below in red.


CYNDI WILLIAMS as ANNE
1) What were your first feelings when being approached to play your role in SAN FRANCISCO? First thoughts after reading the script?

I’m not easily shocked. When I read the script, I thought it was beautiful and strange.

Kyle had asked me to be a reader for some of the auditioning actors, saying I was too young for the role in SAN FRANCISCO. To my surprise, he ended up offering me the role anyway. I was thrilled to accept, and hugely relieved that my character’s only nakedness would be emotional nakedness! I’d gotten enough body criticism after ROOM to last me the rest of my life. Nothing like googling yourself and half the entries pass judgment on your body! Yes, that is shallow of me, but that was my first thought about the role! Clothes stay on! Yay!

IT IS NOT THE WOMAN WHO IS PERVERSE, BUT THE SOCIETY IN WHICH SHE LIVES! Isn't it bloody perverse that Cyndi, a frankly radiant woman, should be singled out for judgment in ROOM? I remember a man at the Woodstock Film Festival (a wonderful fest, btw!), who asked "Why did you cast such a fat actress as your lead?" and I just got so irate that the whole purpose of making the film had been lost on this guy. Cyndi is more representative of a NORMAL American woman than any of the major stars trotted as "All-American" by Hollywood. I remember the filmmaker Barbara Hammer was in audience and she blurted out something like "I don't know what the hell you're talking about, I think Cyndi is beautiful!" and there was applause, which made me feel great. Wish Cyndi could've been there! I think often that film, advertising, image-making, et al, has done a HUGE disservice to our conception of ourselves and what is and isn't acceptable about our own bodies. It has also limited our connection to ourselves as sensual beings. Everyone has the capacity for giving and receiving pleasure. It is only the hucksters of more crap who want us to believe that pleasure is only possible within a narrow range.

Before the shoot, Gary and I got together with Kyle and P.J. and took photographs together at the Long Center here in Austin, for set dressing. The upscale location and our dressed-up look helped me hone in on the type of life this couple led before the husband’s accident.

ROOM was the film in which I had to wrestle many, many fears to the ground. In SAN FRANCISCO, I think the men had the more difficult time!

4) During the process of making the film, was there anything you learned about the world or yourself that you feel like sharing?

I don’t know that I learned this so much as it was graphically illustrated in this experience: Laughter and tears are not opposites on a spectrum; they are mushed up against each other in a sticky sweet mess. Underlying the words of my scenes was an urge to laugh and/or cry. But this isn’t about Anne and she keeps a stiff upper lip. This film makes me think about acts of kindness as well, how an act of kindness is a gift, and how these little gifts can come from unexpected places. Everyone is offering gifts in SAN FRANCISCO: Anne selflessly gives her husband what he desires, the hooker and the husband give each other an intimacy beyond a business transaction. Oh, yeah, and I learned that you really can’t dye hair grey.

I loved the way the scenes in the house were filmed! Our tiny crew lived, ate, and filmed in the house. There was time to shoot scenes over and over, to play them differently, to see what worked best. As an actor who has a lot more theater experience than film experience, I reveled in the opportunity to explore the possibilities in a scene. I loved my day on set; I loved the sense of purpose and teamwork radiating from cast and crew. It was a very satisfying experience.
Posted by An omnibus-of-shorts film at 3:55 PM